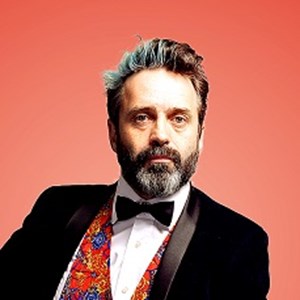 Phil Nichol is a truly unique performer. An acclaimed actor, award winning comedian, producer, presenter, writer and musician, there is no end to his talent!
Phil is an international comedy festival legend and old friend of The Classic Comedy Club.

Phil is an energetic and exciting performer with an unquenchable thirst to break boundaries and innovate with his work. His skill as an improviser whether it be musical, comedy or straight is unparalleled. With a surreal edge to his mischievous rantings, Nichol always brings something new to the stage. His keen sense of fun and eye for the shocking and absurd has cemented his position as one of the best comedians on the circuit today - shown clearly by his record-setting six nominations for the Chortle Awards' 'Best Headliner/Club Comic'.

As well as a successful stand-up, Phil has an accredited screen career with appearances on: Rob Brydon's Annually Retentive (2006), Never Mind the Buzzcocks (Series 19),  The Graham Norton Show as a guest and musical artist (2007) and portrayed Terry Gilliam in the BBC adaptation Holy Flying Circus, covering the controversy surrounding the release of Monty Python's Life of Brian. Phil also competed in a special episode of The Weakest Link in 2007, featuring comedians. On being voted off he stripped naked before taking the 'walk of shame'. Host Anne Robinson joked on Outtake TV that 'it was disappointing because he only had a small part'.

More recently Phil has been focused on touring his show "Your Wrong" which was the second best rated show during the Edinburgh Fringe 2017. A show which The Classic is very excited to present in the 2019 NZ International Comedy Festival!
VERY EXCITED - It's been too long, mate!

“… not just comedy but soul-quenching storytelling at its finest.” ***** - EdFestMag

WINNER: SOMEWHERE BENEATH IT ALL, A SMALL FIRE BURNS STILL AT SCOTSMAN FRINGE FIRST AWARDS 2011

NOMINATED: THINGS I LIKE, I LICK AT THE PERRIER AWARDS 2002

NOMINATED: CORKY AND THE JUICE PIGS AT THE PERRIER AWARDS 1993