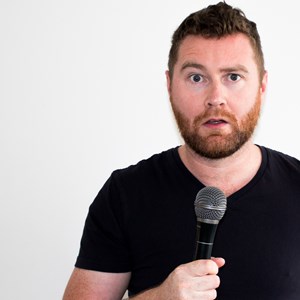 After temporarily paralysing his mother during child birth with his unusually large cranium, Dubliner Alan McElroy dragged his heavy noggin around, accumulating scratches and scrapes from the ground and the carpet burn from the never ending sand paper like floor covering that devoured Ireland in the 1980s. As the Old Country moved into the 90s, so did the floor covering material. Heavily influenced by home decorating television shows, the wooden floors had Alan looking like a shunned, unkempt hedgehog because of the countless splinters stuck in his head.

It took 28 years before Alan grew into his own mallet-of-head and was finally able to leave Ireland and fly to New Zealand, without being forced to pay a large extra baggage fee.

Now he regularly performs on the Auckland scene to laughter, LAUGHTER!

Alan McELROY is avaliable for hire. Click here to enquire.