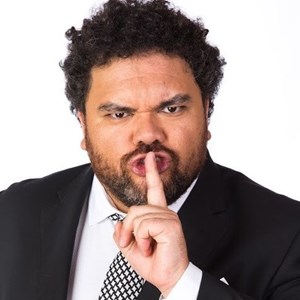 The star of ' 7 DAYS' , TV3's The Project and the soon to be released feature film ' Gary of the Pacific'.

Josh Thomson is a Timaru born idiot from sturdy South Island and even sturdier Tongan Island Stock. He studied Theatre and Film at the University of Otago and now has a useless Bachelor of Arts somewhere at his parent's house.

Josh arrived in Auckland to do stand up comedy and appeared in a couple of "Pulp Comedy's", but took up acting because actors get lunch, and most of the time they don't have to pay for it.

He's graced the small screen in some iconic commercials and several TV series that no one watched such as "Terry Teo", "Hounds", "Coverband", the voice of the tubby ginger kid in "Barefoot Bandits" and in his first feature film lead role as Gary in Gary of the Pacific.

Josh continues to work as an actor, MC and comedian when he is not doing his new job, appearing as an idiot on the daily news show "The Project".  He's toured with NZ's best comedians from "7 Days" doing stand up and the 7 Days:Live show the length of the country. In demand for his MC skills he's hosted the NZ Film Awards, the 48 Hour Film awards, various corporate events and even guest spots at the NZ Music awards.

He still loves working behind the scenes as a director, writer, editor and whatever else he can do to pay for the new floor in the laundry since he broke the last one when he tried to fix it himself.

Josh THOMSON is avaliable for hire. Click here to enquire.