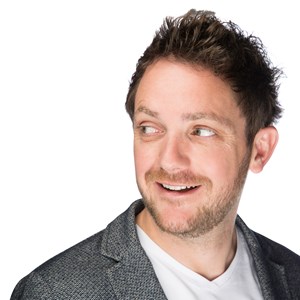 Danny has been performing stand-up comedy for over of a decade, headlining regularly at top comedy clubs and festivals to worldwide audiences. As the resident host and owner of The Comedy Crunch in Dublin, one of Ireland’s most successful comedy clubs - his friendly, high energy and anecdotal style draws in an audience and brings on the big laughs with ease!

Following in the footsteps of Simon Pegg, Dylan Moran and Dara Ó Briain – Danny was handpicked in 2016 to perform as part of the iconic ‘Best of The Edinburgh Fest’ Show across Australia touring Perth World Fringe, Adelaide Fringe Festival and The Melbourne International Comedy Festival. He was asked back in 2018 and again 2019, making him the only Irish comic to do the tour a record three times.

He performed his first solo show at the 2012 Edinburgh Fringe Festival to rave reviews and scooped the title of “Dublin’s Funniest Comedian” at the prestigious “Stand Up For FM104” that same year. In 2013 Danny took part in the Irish TV show The RTE Comedy Awards and released his first comedy album on iTunes as part of the Irish Underground Comedy Show. He also beat sixteen of Ireland’s best up-and-coming acts to take the coveted Toilet Duck Award at Tedfest (the now-famous Father Ted celebration).

He has returned to The Edinburgh Fringe with a brand new hour each and every year since. His 2018 solo show ‘Lock-In’ sold out its entire run at The Edinburgh Fringe Festival, Galway Arts Festival, Wexford Spiegeltent Festival, Clifden Arts Festival and received rave reviews. The show toured over 60 dates all over the globe in 2019 including an extensive Irish tour as well as cities including London, Prague, Brno, Budapest, Berlin, LA and finally finishing with a month-long tour of Asia including Bangkok, Saigon, Hanoi, Jakarta, Singapore and Kuala Lumpur. His brand new show ‘Reformer’ debuted at the 2019 Edinburgh Festival and had a series of sold-out shows in the US, Europe and a whole host of Festivals as well as a 30+ date sellout Irish and UK Tour in 2020. This year also saw him launch his own brand-new podcast ‘Danny O’ Brien’s Lunch Break’ as well as several upcoming Irish Television projects including RTE’s ‘Laughter in The Eyre’ which aired in January of this year.

Danny featured in The 2017 Comedy Central Show “Brexit at Tiffany’s” and is a regular on Irish Television and Radio. He has toured nationally with Ireland’s biggest radio stars Dermot & Dave on their sell-out live show as well as regularly opening for acts such as The USA’s David Cross and Scotland’s Iain Stirling in Ireland’s premier comedy venue, Vicar Street. In 2018 he opened for American comedian Bill Burr in front of over 7,000 people in Dublin.

“He opened for me at the 3Arena and f*cking murdered it!”— Bill Burr

“O’Brien is genuinely, uproariously funny with a huge stage presence and wicked timing”

"A perfect mix of brains, banter and brilliance"-Great Scott ★★★★★

"Danny is everything you could want from an Irish comedian. A born storyteller who knows how to get the crowd roaring with laughter"- Glam Adelaide ★★★★1/2