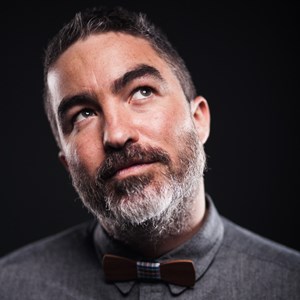 Dai Henwood has been making people laugh for over a decade having taken up comedy while studying at Victoria University.

Since winning the Billy T Award in 2002, Dai has taken his comedy around the world to the Melbourne Comedy Festival, the Edinburgh Festival Fringe and the prestigious invite only, Montreal Just For Laughs Festival.

Dai has also become a well recognised TV personality since his days in 2007 when Dai was asked to host the cult hit "Insert Video Here" for C4. From there he went on to host two series of his comedy travel show "Roll The Dai" along with three years at the helm of the New Zealand Music Awards.
Dai is mostly recognised around New Zealand as Team Captain on TV3's "7Days."

He has also released several DVD's including "Dai Another Day" and "Adapt or Dai" available for purchase from his website (see below).

A real character who is much loved around the country, Dai is one of the best comics this country has produced.

Looking to hire this comedian?
This comedian is not available for birthday parties, anniversaries or weddings. Sorry.
Drop us a line with details of your corporate event and we'll pass it onto their management.
Dai is managed by Notorious Management Ltd

Dai HENWOOD is avaliable for hire. Click here to enquire.