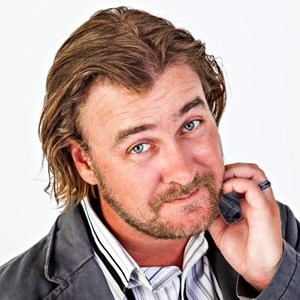 Slick as hell, a true professional

Born in Canada, raised in the UK and residing in New Zealand, Jeremy Elwood has been performing for more than 15 years. Elwood continues to observe, question and dissect our society, and turn what he finds into comedy gold.

Jeremy Elwood has headlined comedy clubs across New Zealand, Australia, Indonesia, Singapore, American and his native Canada, as well as appearing regularly on NZ Television and Radio. A regular panelist on both TV3's "7Days" and Radio New Zealand's "The Panel" he is well known for serving up hilarious stand up infused with intelligence and thought.

Having won the New Zealand Comedy Guild's 'Best Male Comedian' and 'Best MC' several years, Jeremy has proven himself to be one of the most in demand and consistent comedians in the country.

Looking to hire this comedian?
This comedian is not available for birthday parties, anniversaries or weddings. Sorry.
Drop us a line with details of your corporate event and we'll pass it onto their management.
Jeremy Elwood is managed by Notorious Management Ltd