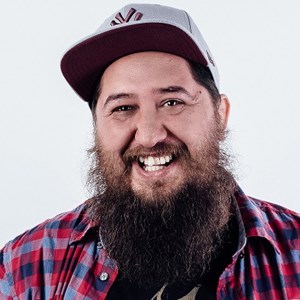 'The Maori guy with the beard and the hat'

Jamaine Ross is a born and bred Christchurchian who is becoming a well-known comedic face on the stand-up circuit as 'The Maori guy with the beard and the hat'.

Over his stand-up career he has achieved a number of accolades, including winning the Raw Comedy Quest in 2012, garnering a Billy T Award nomination in 2014, and winning the inaugural NZ International Comedy Festival's 'Best Facial Hair' award in 2014. He has also opened for Tenacious D on their New Zealand tour in 2013, and opened for Demetri Martin at his Christchurch show in 2019.

He has appeared on and written for television shows such as Three's '7 Days', 'Jono & Ben', and ‘Funny Girls’, as well as Maori TV's 'Only In Aotearoa' and 'Brown Eye', and had a cameo appearance on Three’s ‘Golden Boy’.

On top of all of that, he's a member of critically acclaimed sketch comedy trio 'Frickin Dangerous Bro', who won the NZ Comedy Guild's 'Best Online Presence' award in 2016, and were nominated for the Fred Dagg Award in 2018. The trio also record a weekly podcast together creatively named, 'The Frickin Dangerous Bro Show'.

Basically, he's a super talented and funny dude who brings a whole lot to the table in any comedic environment.

Jamaine ROSS is avaliable for hire. Click here to enquire.