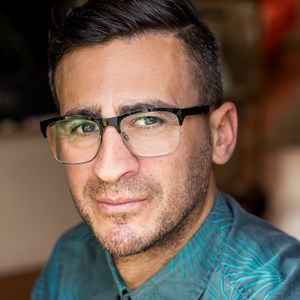 7 Days regular and star of “What We Do In The Shadows”, Cori Gonzalez-Macuer has
been performing his unique brand of self-deprecating, observational and deadpan
comedy since 2003.

In that time he's won the Billy T James Award, appeared on film and
television, and performed in Australia, America, England, Scotland, Singapore and as far
as the Middle East and South America.

Since becoming a father recently, Cori's truly happy for the first time ever, but that
doesn't mean he’s stopped disliking a lot of stuff. From NZ ‘Socialites’, to people who
post inspirational quotes, to reality TV "stars", there's a lot of annoying people on this
earth. Join him as he dissects the people he desperately hopes his daughter doesn't turn
into.

Whether it's on the stage or screen, Cori's reluctance to accept a career in entertainment
is what has made him the performer he is today.

Reviews:
"… keep an eye out for future works by the man with exponential potential, Cori Gonzalez-Macuer." - Concrete Playground

"While his cynicism might make you think he is making lemons out of lemonade he does
it in such a cool manner, standing alone with his mike, his great eyebrows adding
emphasis, that you know he's speaking truths we all feel “Awesome? Nah, Bro” is
comedy fest at its best. Get in before the tickets dry up." - Theatreview

Cori GONZALEZ-MACUER is avaliable for hire. Click here to enquire.