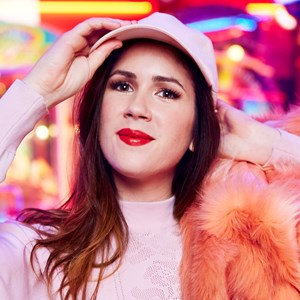 A rising star over the Tasman, now making a noise in NZ. As seen on TV3's 7 DAYS.

Writer, performer and rat Becky Lucas is one of most exciting voices on the Australian comedy scene and is commanding worldwide attention.

Becky has spent years writing and performing stand-up nationally, locally and in her bedroom. She was a National RAW Comedy finalist in 2013 and was hand picked for the prestigious Melbourne International Comedy Festivals’ The Comedy Zone showcase in 2014. Becky performed her debut solo show in 2015 ‘Hightide’ to sell out crowds and rave reviews and backed it up in 2016 with her second solo hour of stand up, ‘Baby’. Her 2017 show ‘Little Bitch’ was toured around Australia & New Zealand and Becky even ventured overseas making her Edinburgh Fringe debut. 2018 has seen her touring her highly acclaimed fourth solo show titled ‘cute funny smart sexy beautiful’ and is a nod to her notoriously low self esteem.

When she’s not on stage, Becky seems to be all over the small screen. She made her stand up television debut on ABC TV for The Melbourne International Comedy Festival’s “Comedy Up Late” and this year had a sought after spot on the Melbourne International Comedy Festival Oxfam Gala. Her TV credits have continued to grow and include hosting ABC2 and Screen Australia’s Opening Short half-hour documentary Big Bad Love, as well as appearances on The Comedy Channels Best of the Sydney Fest & JFL’s The Stand Up Series, the ABC’s Fancy Boy, Network 10s’ Hughesy, We Have A Problem and Drunk History, not to mention 7 Days NZ, and you couldn’t have missed her alongside friend and fellow performer Cameron James as hilarious millennial journo’s in Comedy Centrals Share This.

As a writer, Becky’s credits include co-writing for Matt Okine’s semi-autobiographical comedy The Other Guy for Stan, as well as Josh Thomas’s Emmy-nominated show, Please Like Me. She has written a series of short stories for Comedy Central. A prolific queen tweeter Becky was named as one of Buzzfeed‘s 27 funniest Australian comedians on Twitter. Becky’s weekly newsletter also has a fan base all of her own.

As a stand up, she’s opened for calibre comics including Wil Anderson, Jim Norton, Beth Stelling, Matt Okine and Joel Creasey and has performed at the prestigious UCB theatre in Los Angeles.

“Her style is the comedy equivalent of putting a silencer on a gun; You don’t hear the pearlers coming, you only know when they hit…her unceremonious punchlines hit dead centre every time, getting huge laughs”  Herald Sun