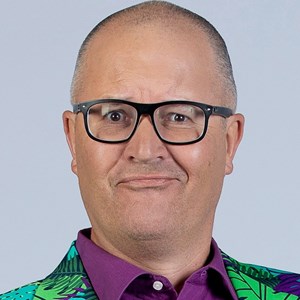 PAUL EGO is a 25 year veteran of the NZ Comedy Scene. Well known for his outstanding improvisational skills as an MC & Feature Act Comedian, Paul can also sing the pants off a Nun.

Paul Ego's Breakfast Radio career began in 2000 with his role on the Kim & Corbett Breakfast Show on Auckland's More FM.

In 2006 Paul moved to The Rock Network and as one quarter of 'The Morning Rumble's Breakfast Show (WINNER Best Music & Entertainment Hosts, Metropolitan -2008 NZ Radio Awards)

A founding panel leader of TV3's '7DAYS' Show and the voice of Stickman on the Pak'n'Save ads.

There is no other bigger Ego. (He is bigger than his son).