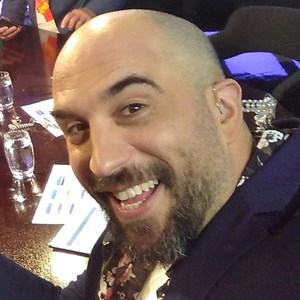 He's back! NZ's latest comedy export, now resident and gigging in New York, is back in NZ for the 2015 NZ International Comedy Festival. Don't miss his return gigs.

One of the stars of TV3s 7Days, Steve Wrigley can always be relied upon for the most leftfield answers and ideas that often send other cast members searching for some kind of sanity. His 2008 Comedy Festival show The First Time won Steve the Billy T Award and he has twice since been nominated for the Festivals most prestigious award, the Fred Award.

Since Steve made the move from his beloved Wellington to Auckland he has become a mainstay of the local comedy industry mentoring for the Class Comedians programme and in 2011 becoming one of the first recipients of the NZ Comedy Trusts Creative Comedy Initiative. His regular appearances on TV have seen him become recognised for his trademark high energy story telling, always with hilarious results

Steve is currently living in the US but pops back every so often to say hello.

Looking to hire this comedian?
Unfortunately, this comedian is not based in New Zealand which tends to limit their availability.
This comedian is not available for birthday parties, anniversaries or weddings. Sorry.
Drop us a line with details of your corporate event and we'll pass it onto their management.

Steve WRIGLEY is avaliable for hire. Click here to enquire.