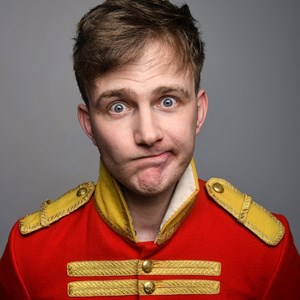 Only the 'Best of British' comedians can rightfully claim an official 'Honourable' title. Tom is one.

A former member of improv comedy group, The Noise Next Door, Tom was raised amongst the height of the British Upper Class, he attended boarding school from 6 years old, his father is the ex-professional head of the entire UK Armed forces, he currently resides in The Tower of London, his dad has just been made a Lord and Tom is now ‘The Honourable’… so naturally, a career in comedy beckoned!

Funny and charming, with roguish tales and hilarious songs, Tom Houghton is star on the rise.

An accomplished and playful performer, Tom frequently shares line-ups with the likes of Michael McIntyre, John Bishop, Jason Manford and Jack Whitehall, amongst others and has supported Daniel Sloss and Justin Moorhouse on tour. A favourite on the stand-up circuit, he’s regularly booked to perform at gigs up and down the country including the Glee Clubs, Komedia and Manford’s Comedy Club and has received invitations to perform at festivals across the UK and Europe including; Bestival, Latitude, Altitude, Download, Lund, Montreux and Comedy Central Festival.

In 2017 Tom was named a finalist in the Leicester Mercury Comedian of the Year Awards and went on to take his eagerly awaited debut solo hour, ‘Class Half Empty’ to the Edinburgh Fringe Festival this August, selling out the entire run within in the first week and adding extra shows due to popular demand. Post Edinburgh, Tom took the aforementioned show on a national tour, culminating with a sold out run at London’s Soho Theatre.

Alongside his flourishing stand-up career, Tom is also a regular across our TV screens. Previously with The Noise Next Door he has appeared on BBC1, BBC3, ITV3, Channel 4 and Channel 5 on such programmes as ‘The One Show’, ‘Edinburgh Comedy Fest Live’, ‘Secret interview’ and ‘It’s a Small World - with Warrick Davis’. Solo he’s co-presented Virgin TV’s ‘Comedy Binge’, appeared on ‘Comedy Blaps’, ‘First Dates Hotel’ (both Channel 4), ‘The Jim Jeffries Show’ for Comedy Central and most recently filmed ‘Roast Battle’ for Comedy Central alongside fellow comic Lauren Pattison.

We're honoured to have Tom performing at The Classic for the New Zealand International Comedy Festival.

“Please take my advice. Get a ticket today. Tomorrow may well be too late. A Star is Born.” ★★★★★ – One4Review

“A funny, emotional and totally unrelatable show by a charming - and completely fascinating – comedian […] he's going to be big!” ★★★★ – Voice Mag