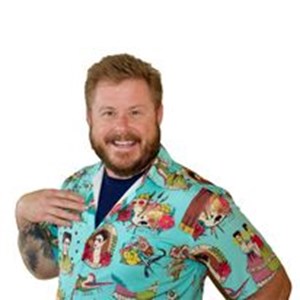 Todd’s journey into stand-up comedy started out as a way to deal with being a man-child during his midlife crisis, a cheating husband, and teacher burnout. Eventually he let all that shit go and stand-up became his newfound obsession. Since graduating from NZ Comedy School in 2019, Todd has been honoured to perform at a few iconic New Zealand venues; The Classic (Auckland), Fringe Bar (Wellington), San Fran (Wellington) and Good Times (Christchurch). To date, he has won zero awards, however, Todd’s managed to suck the life out of audiences at NZ Bear Week, No Homo, Level Up Comedy, and the Wellington Fringe. A native Californian, Todd grew up between the mountains of New Mexico and the megalopolis that is Los Angeles/Orange County. He and his partner fled to Aotearoa New Zealand in 2018 to take a break from the chaos in the United States. Immediately, they fell in love with Kiwi life and decided they are never going back to that dumpster fire of a country. Now buy him a bloody drink!

Todd HOPKINS is avaliable for hire. Click here to enquire.