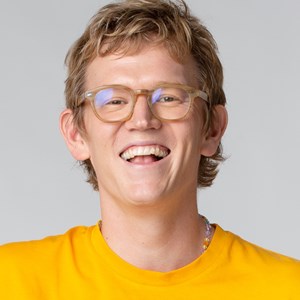 The self proclaimed People's Princess of Aotearoa, Chris Parker is most commonly known for his funny Instagram videos, legendary win on New Zealand Celebrity Treasure Island and even his felted hat he made during the 2020 nationwide lockdown that was then acquired is on display at The Auckland Museum. But before Instagram was even a twinkle in Mark Zukerbergs eyes Chris started out in comedy by being a hyper earnest theatre graduate at the renowned Drama School Toi Whakaari O Aotearoa. Chris has appeared in and written multiple theatre shows across the country, most notably Hudson and Halls Live! Where Chris played one half of the famous gay cooking duo, David Halls and won best actor at the 2017 Wellington Theatre Awards.

As a  comedian and writer Chris has been seen on 7 Days, Have You Been Paying Attention, Jono and Ben, Funny Girls and the sitcom Golden Boy. Chris also co hosts the podcast The Male Gays with fellow comedian Eli Matthewson.

Chris has been listed as The Herald's top 5 entertainment heroes of 2020 and in 2021 was nominated for Television Personality of the Year, but when he's alone at home and not on camera he can be a total brat.

Chris PARKER is avaliable for hire. Click here to enquire.