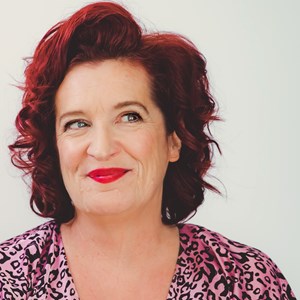 Those who know Justine, or have seen her perform, will know she does not suffer fools gladly. Her charming and expressive performance take her audience along the journey with her, while never far from a punch line or a subtle gag using the raise of an eyebrow.

This Christchurch girl made good, now residing in West Auckland, there’s not a lot that gets past Justine. If you were to try and define Justine as a lover or a fighter, you'd have to say both. She is capable of tearing strips off people on stage, and then buying them a drink after the show.

Justine has previously won the 'Billy T Award' in 2003 and the NZ Comedy Guild 'Best Female Comedian' in 2008. A popular Comedy Festival performer, her solo shows: 'The Justine Smith Hour', 'Return Of The Jussi' and 'Jussi Town' have garnered critical acclaim. Justine has also written two live shows with Irene Pink, 'I’m Sorry I Said That' and 'The Pitch'. The latter was the recipient of the NZ Comedy Trust’s Creative Comedy Initiative grant.
Justine has been performing around New Zealand for blimmin’ ages.

Justine is recognised for her appearances on everything from the Comedy Gala and AotearoHA to her memorable appearances on TV3's After Hours and Funny Girls, as well as a regular panelist on TV3's  7 Days and a writer on Rhys Darby’s Short Poppies.

A leading light of New Zealand Comedy, Justine is just as comfortable in a theatre or a local bar in the country.

Simply one of our best.

“I doubled over with laughter” – Theatreview.org.nz

Looking to hire this comedian?
This comedian is not available for birthday parties, anniversaries or weddings. Sorry.
Drop us a line with details of your corporate event and we'll pass it onto their management.
Justine is managed by Notorious Management Ltd