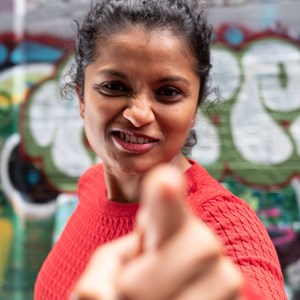 A fresh talent from Wellington

For most of her life, Sowmya felt it was a joke - when she brings ‘her take on life’ to the stage, it turns into comedy! She’s glad she's a comedian now, even though her mum still doesn’t know (shhh).

Sowmya has been seen in sold-out NZ Fringe shows ‘Quick! Before They Deport Us!’ and ‘Whose country is it anyway?’ and was voted best female comedian in 2020 by Cartel Comedy. Catch Sowmya at The Comedy Mixtape, cracking us up with her own funny stories about family, dating, race, and life in NZ in general.

“…a pint-sized maharani with a wry wit” - The Hook”

Sowmya HIREMATH is avaliable for hire. Click here to enquire.