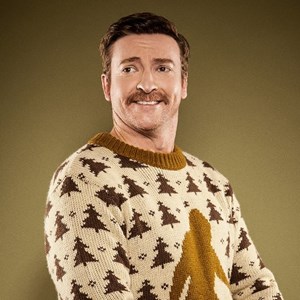 One of NZ's most successful comedians on the international scene. Back in NZ for a rare appearance at The Classic.

Rhys Darby is an actor, writer and stand-up comedian from New Zealand.

Best known as Murray from HBO’s Flight of the Conchords and Steve in TBS’ Wrecked,  Darby has gone on to star in a plethora of television and films, from The X Files, to Voltron: Legendary Defender, also starring in movies like Yes Man and Jumanji.

An ex-soldier in the New Zealand Army and a veteran of twenty years as a stand-up comedian, Darby made his feature film debut in Yes Man. He went on to star in films like The Boat that Rocked (Pirate Radio),.  Most recently he was seen in the Taika Waititi’s films What we do in the Shadows and Hunt for the Wilderpeople.

Darby is never far from his stand-up roots. His stand-up has been described as a sensational blend of sound effects, characterizations and askew observations. His career has taken him from his homeland of New Zealand, to the U.K. and beyond. He has performed his unique brand of humour in places as far flung as Iceland to the Falkland Islands, and in festivals from the Edinburgh Fringe Festival to Montreal’s Just for Laughs.

Rhys has four stand-up specials’, Imagine That! (2008), It’s Rhys Darby Night! (2011), This Way to Spaceship, (2012) and I’m a Fighter Jet (2017). This Way to Spaceship was based on his debut novel of the same name, “A loosely autobiographical end of world companion” in 2012. It was number 1 in the international charts for 7 weeks. His second book, this one for kids, The Top Secret Undercover Notes of Buttons McGinty is being released in 2018.

In between his huge adventures Darby is based in Los Angeles with his family where they like to hike and eat tacos and he is a regular TBS’ Wrecked and Netflix’s Voltron. You will also see him appear on other shows like Life in Pieces, Modern Family and the new TMNT reboot.

Rhys DARBY is avaliable for hire. Click here to enquire.