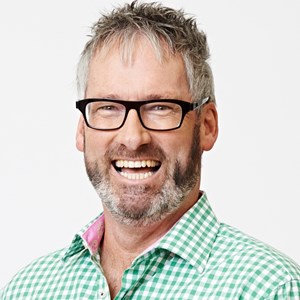 A 1962 stand-up comedian, radio & TV presenter, computer programmer and Leo, who was born in Westport, grew up in Palmerston North and now lives in Auckland.

Jeremy is married to the wonderful Megan and they have a dog called Nugget and a few kids.

You most likely know Jeremy as the host of "7 Days" on TV3 Friday nights.
He has also hosted the New Zealand edition of "Deal or No Deal" and starred alongside Paul Ego in their sitcom "The Radio."
As well as having given his kiss of death to various other TV projects, Jeremy was the co-host of MORE FM's breakfast show for 18 years.

Corbett continues his stand-up career hosting and headling nationwide. He is a festival veteran and hosted the 2013 NZ International Comedy Festival Gala.

Jeremy's entry was removed from Wikipedia due to 'No indication of importance'.
(Apparently it's now been reinstated, which actually makes him feel less special.)

"A Classic Comedy legend" Scott Blanks, Director of The Classic

Jeremy CORBETT is avaliable for hire. Click here to enquire.