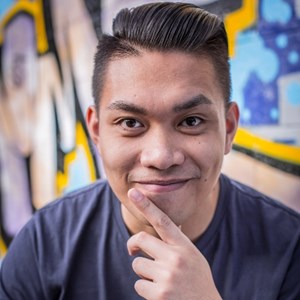 In 2011, James was a stand-out performer on TV3's "AotearoHa: Next Big Things" and was nominated for 'Best Newcomer' in the 2013 International Comedy Festival for his solo show "James Roque is Chicken!?".

Outside of the comedy world, James trained as an actor at Unitec in Auckland and is a co-founder of Pretty Asian Theatre, a company dedicated to bringing Asian inspired stories to the New Zealand stage. He has also worked with Indian Ink Theatre company touring with the hit show "Kiss the Fish".

Roque continues to be a regular at The Classic and performs comedy throughout the country on a mission to show New Zealand what you get when the Filipino and Kiwi cultures collide.

James ROQUE is avaliable for hire. Click here to enquire.