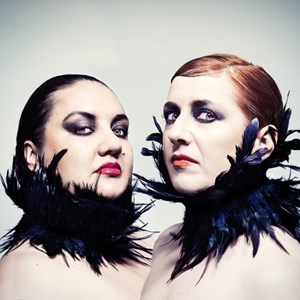 Their fast rise and reliably hilarious performances led to a sold out season of their award-winning 2016 show Ask the Fan Brigade. This was followed by another sold-out season in 2017 with Don’t Ask the Fan Brigade.
They were a hit sensation as part of the “best of the fest” NZ-wide tour, the Best Foods Mayo Best Comedy Show on Earth, and can be found ripping the sh*t out of their enemies on a comedy stage near you.

“Their musical performances are creative and intellectual masterpieces” - Metro Magazine

“The funniest new act in NZ for years.” - Brendhan Lovegrove

“The two singer girls. One with little guitar. I laughed. And laugh. And laugh some m0re.” - Some punter on the Classic Comedy Club facebook page

"You better not f*cking write a song about me." – Amanda's dad

Fan Brigade is avaliable for hire. Click here to enquire.