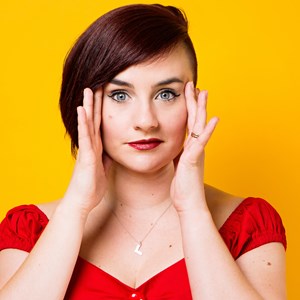 Watch Laura on Live at the Apollo

Laura Lexx is an award-winning comedian, actor and writer.

Following critically-acclaimed runs of her shows Trying and Knee Jerk, Laura won Best Performer in the Comedian’s Choice Awards at the 2018 and 2019 Edinburgh Fringe. She was also named in the Top 10 of Dave’s Funniest Joke of the Fringe in 2018. Trying transferred to the Soho Theatre in London in 2019.

Laura’s shows, Tyrannosaurus Lexx and Trying, are available to watch on NextUp Comedy.

Laura won Best MC in the 2017 Comic’s Comic Awards and was nominated as Best Compere in the 2016, 2017 & 2018 Chortle Comedy Awards. She also reached the finals of the Amused Moose Comedy Award in 2016 & 2018. Laura has gigged at comedy clubs and festivals all over the UK and around the world as well as providing tour support for Jason Manford, Tim Vine and Russell Kane.