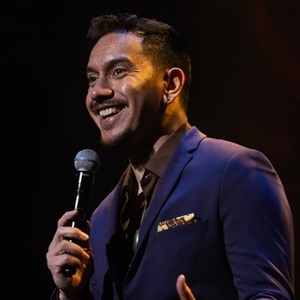 As seen on:
Maori TV Waitangi Comedy Boil Up & Crack Up
TV3 Comedy Gala
Ben and Steve World Famous in...

A 2013 Fred Dagg Comedy Award Nominee and 2 time Billy T Comedy Award Nominee, Welsh / Samoan comedian, James Nokise, has carved out a reputation in New Zealand going after everything from gangs, to politicians, to stereotypes within Pacific Culture.

Over the last couple of years he's been to the Edinburgh and Adelaide Festivals; guest lectured at Universities; been a member of the award winning Puppet Fiction (Pulp Fiction with Puppets) crew; written Wellington's most popular political satire series (Public Service Announcements); all while continuing to be a regular host at Wellington and Auckland comedy clubs, as well as a commentator for Radio Live and 531 PI.

Not bad for a bro from the Hutt Valley.

"This Wellingtonian has got all the moves" - Metro Magazine 2013

James is based in Wellington, but flies up to Auckland regularly.

James NOKISE is avaliable for hire. Click here to enquire.