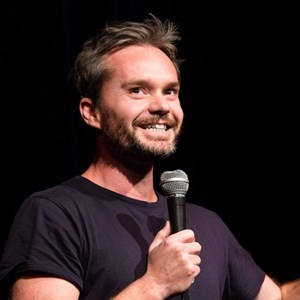 Nick is in constant demand as a corporate comedian and MC for business events, Rado’s comedy experience along with his clean and hilariously innovative stand-up is a massive hit on the corporate circuit.

Nick was recently commissioned to write, produce and star in his very own sitcom Sidelines for TV3’s Pilot Week initiative that was aired in October 2018. Nick’s Sidelines sitcom has had numerous production company’s fighting to get involved in Australia such as Princes Pictures (Summer Heights High), CJZ (The Gruen Transfer) and the idea is also currently being developed as a feature length film. Nick has also been a writer and script consultant for an ABC children’s show called ‘Hardball Heroes’ with Northern Pictures Australia.

Nick has a background in radio where he worked for ten years in the UK. Highlights included on-air breakfast talent for Bristol GWR (now Heart), numerous SONY awards, and being the Executive Producer for Heart Breakfast with Jamie Theakston and Emma Bunton in London.

Nick stepped away from radio to learn his trade for over five years on the UK comedy circuit. Nick was a regular MC, Opener and Headliner for Jongleurs, The Comedy Cafe London, Headliners, Highlight and many more UK clubs.

Reviews:
“Had me nearly rolling on the floor with Laughter” Theatreview NZ
“Charm, Timing and above all Funny, Rado has it all” Headliners, London
“On-Its-Toes crowd-pleasing buffoonery at its best” 4 Stars - Three Weeks, Edinburgh Festival
“One of New Zealand’s finest” Just For Laughs, Sydney
“The jokes maybe International but the Laughter is Universal” - 4 Stars - One4Review Edinburgh Festival.

Looking to hire this comedian?
This comedian is not available for birthday parties, anniversaries or weddings. Sorry.
Drop us a line with details of your corporate event and we'll pass it onto their management.Nick is managed by Creeping Charlie Ltd www.creepingcharlie.co.nz