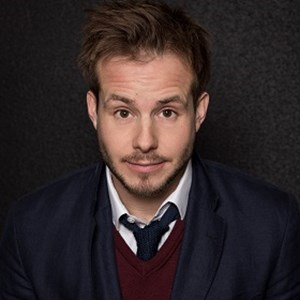 A special message from Jimmy ... heading back to NZ for Comedy Fest!

Jimmy McGhie is a highly regarded stand-up comedian, host, warm-up artist, who performs on the UK and International comedy circuits to great acclaim and including a previous nomination for Chortle Best Compere.

Jimmy is a regular at the top clubs in the UK including The Comedy Store, The Glee Clubs, Highlights, Jongleurs and Komedia Theatres. He can be seen on Series 3 of BBC Three’s Live at the Electric and has appeared on Russell Howard’s Good News, as well as co-presenting the Dave Gorman Radio Show on Absolute Radio. He has also supported Chris Addison and Simon Bird on tour. As well as the popular local panel show 7 Days and Comedy Gala 2017.

A familiar face in Australia having performing at the Perth, Adelaide, Brisbane, Sydney and Melbourne International Comedy Festivals for several years and where he was previously nominated for Best International Act.
Jimmy regards himself as a Festival Comedian, performing extensively around the globe: Australia, Mumbai, Vietnam, Indonesia, Singapore, Hong Kong, Bangkok, and all over Europe.

Jimmy McGhie is a comedian in every sense of the word. There are no gimmicks or pretences in his act.
An hour with Jimmy is one spent in the company of a genuine comedian filled with sincere and humorously crafted anecdotes. It's no surprise we keep inviting him back to The Classic.

“Jimmy’s storytelling is funny, candid, confident and involving” -  Time Out

"He is a blindingly good comic... one of the most accomplished hours of comedy you will find here this month. Or, to be honest, anywhere, any time. He is white, male, posh and straight, and so ticks no boxes any more, but he bravely overcomes all that to be very, very funny."  - The Scotsman