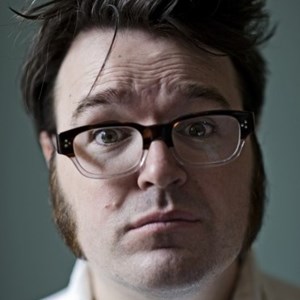 One of NZ's most successful 'comedians at large' with over 15 years experience on the UK Pro circuit.

New Zealand Sensation Jarred Christmas is one of the most innovative and exciting stand-ups on the UK circuit. A sought-after headliner famed for his quick-witted spontaneity, masterful skills of improvisation and energetic storytelling; Jarred is a regular at the Edinburgh Festival, and at comedy clubs and International festivals around the globe. He is a regular team member at The Comedy Store’s weekly topical show The Cutting Edge and was recently named Best Compere at the 2016 Chortle Awards; scooping the title for the second time.

A dynamic onstage persona combined with the ability to improvise with anything that’s thrown his way makes Jarred’s comedy sizzle with originality. Early in his career he supported both Ross Noble and Tommy Tiernan on UK tours. He has since written and performed in countless shows at the Edinburgh Festival and has toured the UK in his own right with his solo shows Jarred Christmas Stands Up and Let’s Go Mofo. He has just played to packed theatres across the UK hosting the All Star Stand Up Tour. The show featured a world-class line-up of comedians and Jarred was honoured to be invited to host the show for the second year running. Jarred returned to the Edinburgh Festival this year, with a brand new solo stand-up show Remarkably Average.

Combining his superlative improv and stand-up comedy skills (not to mention vocal agility), Jarred has recently developed The Mighty Beatbox Gameshow and a child-friendly version The Mighty Kids Beatbox Gameshow which he hosts alongside acclaimed beatboxer The Hobbit. The show has played at festivals around the UK including Edinburgh and the Leicester Comedy Festival. The kid’s version of the show was recently nominated for ‘Best Children’s Show’ at the Leicester Comedy Festival.

Since arriving in the UK, Jarred has amassed extensive TV experience, appearing on Mock The Week (BBC2), Never Mind the Buzzcocks (BBC2) 8 out of 10 Cats, (Channel 4), and Argumental (Dave). He recently hosted BBC NI’s series Monumental, taking the reins from Adam Hills in the hit panel show celebrating the great and peculiar side of Northern Ireland. As a stand-up, he has appeared on The Comedy Store, Edinburgh & Beyond, Comedy Blue and The World Stands-Up (Comedy Central), as well as One Night Stand (Dave) and Russell Howard’s Good News (BBC Three).  He’s also been a regular on the airwaves; co-hosting The Rhod Gilbert Show (BBC Radio Wales), guesting on Act Your Age (Radio 4), Jest A Minute (BBC Radio Wales), Spanking New (BBC Radio 7) and Flight of the Conchords (Radio 2) to name but a few.

Jarred is an accomplished actor, working with Warwick Davies both on stage and in the web series, Dwarves Assemble. A highly versatile performer, with tremendous energy and exuberance, he has also amassed several successful stage performances in Panto. He first appeared in 2012, playing Herman The Henchman alongside Priscilla Presley as The Wicked Queen in Snow White at The New Wimbledon Theatre. Following a successful debut, he returned to the same theatre in 2015 to star in Peter Pan taking the lead comedy role of Smee, alongside Verne Troyer and Marcus Brigstocke. Most recently he played Buttons in Cinderella working the crowd with “hurricane enthusiasm” (Telegraph), alongside Torville and Dean at the Bristol Hippodrome. Back on TV, Jarred has guest-starred in Hollyoaks Later, Jonathan Creek, and Up The Women.

Jarred CHRISTMAS is avaliable for hire. Click here to enquire.