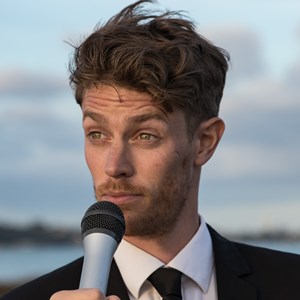 Tim Batt is one of the kiwi comedy scene's secret weapons.

Tim Batt is a seasoned performer both as a comedian and MC.

Tim is one half of The Worst Idea of All Time - NZ's most internationally successful comedy podcast ever, with over 10 million downloads.

Tim has performed across NZ, Australia, UK and USA. Twice nominated for the Billy T (2014/15) and 2013's Best Newcomer in the Comedy Fest, you may also recognise him from his political/comedy chatshow on Banter (TVNZ Duke), 7Days, Jono and Ben at Ten (THREE) and more. Tim has also produced shows including The Male Gayz (TVNZ) and No Experience Necessary (Comedy Central).

Tim's comedy festival shows have received multiple 5 star reviews and been described as: