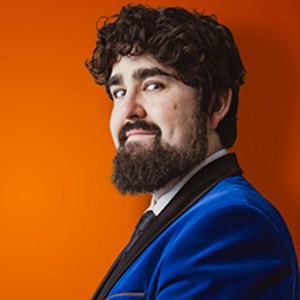 As seen 'Seven Sharp', 'Have you Been Paying Attention' and '7 Days'

AS SEEN ON SEVEN SHARP, HAVE YOU BEEN PAYING ATTENTION?, SEVEN DAYS AND THE CHRISTMAS GALA

Rhys Mathewson is a stand up comedian and reporter who has won pretty much every award New Zealand comedy has to offer. He currently serves as the roving reporter on Seven Sharp. Rhys has performed all over the world, including a packed out Spark Arena supporting Jack Whitehall.

Looking to hire this comedian?
This comedian is not available for birthday parties, anniversaries or weddings. Sorry.
Drop us a line with details of your corporate event and we'll pass it onto their management.
Rhys is managed exclusively by Creeping Charlie Ltd www.creepingcharlie.co.nz

Rhys MATHEWSON is avaliable for hire. Click here to enquire.