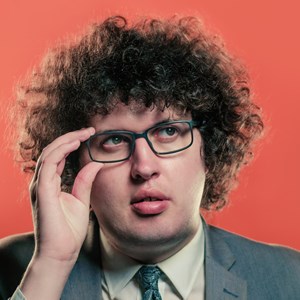 As seen on '7 Days' and ' Have you Been Paying Attention'.

Ray O’Leary’s deadpan delivery is a staple of the New Zealand comedy scene and his hilarious awkward bravado has found him regularly performing as a stand-up comedian and MC.

This big brain in an ill-fitting suit is a regular performer and writer on 7 Days, Have You Been Paying Attention?, Jono and Ben as well as acting on Golden Boy and much more. His sold out shows in the New Zealand International Comedy Festival received rave reviews and he has twice been nominated for the prestigious Billy T James award (current 2020 nominee, 2017 Billy T loser). He can also be heard on the hit Dungeons and Dragons podcast Waterdeep Mountain High.

Ray O’Leary is a Whanganui raised comedian, and began his stand-up career in Wellington. Now based in Auckland, Ray can be found performing around the country alongside the nation’s top comedic talent.

Nominated for Best Comedian, Best Newcomer, Most Improved, Breakout Performer and Most Loved at the 2016 Wellington Comedy Awards