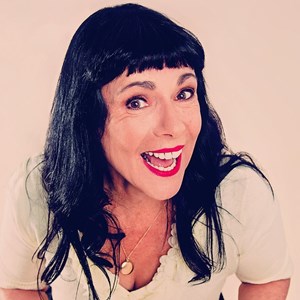 Winner of "Female Comedian of the Decade" at the 2010 NZ Comedy Guild Awards, Michele A'Court is a fulltime professional stand-up comedian and freelance writer.

Her international experience as a stand-up comedian includes recent shows in Las Vegas, San Francisco, Vancouver, Victoria and Toronto. She has performed at comedy festivals in Edinburgh, Glasgow, Melbourne and Adelaide; and entertained NZ and international troops in East Timor.

Michele's work turns up everywhere - on stage, television, radio; in newspapers and magazines - and she is in demand as a comic, an event MC, and also as a social commentator across all media.

Michele is a regular guest on TV3's award-winning comedy show "7 Days"; she has a regular spot reviewing the world's weirdest news on TVNZ's "Good Morning"; she is on Radio NZ National's "The Panel" with Jim Mora; and "9 to Noon" with Kathryn Ryan and Te Radar.

Michele has been writing a weekly column for The Christchurch Presssince 2008 and relishes the opportunity to comment on current social issues. She is also a frequent freelance contributor to several national magazines.

Michele's latest solo comedy show, "Stuff I Forgot To Tell My Daughter", was a sold-out hit at the 2013 NZ International Comedy Festival and the 2014 World Buskers Festival. Michele continues to tour the show nationally and internationally.

Michele first came to NZ's attention more than 20 years ago as the award-winning host of "What Now", the children's TV show which aired live for two hours each week, and "The Video Dispatch", a current affairs programme aimed at youth but, according to legend, was the "must-see TV show" for NZ's politicians.

Looking to hire this comedian?
This comedian is not available for birthday parties, anniversaries or weddings. Sorry.
Drop us a line with details of your corporate event and we'll pass it onto their management.
Michele Acourt is managed by Notorious Management Ltd

Feminists Are Funny - A Comedy Showcase