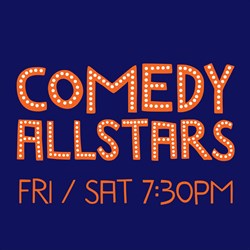 The Comedy All-Stars - Every Friday & Saturday

It's the main event of the week - every Fri & Sat at 7:30pm we feature a fresh line-up of headliners, rising stars and occasional 'drive bys' from international guest comedians. Go see who's on. 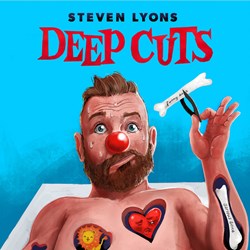 
A slice of alternative comedy

Steven Lyons has performed comedy around the globe and makes comedy hugs for your ears with his absurd yet empathetic wordplay and views on life. In Deep Cuts he explores how scars, our accidental tattoos, tell the story of our lives. Through tales of wounds, wonders and the world around us, Steven asks who he’d be today if he’d made it this far without running through a glass door or two.

While living in Chicago Steven performed at comedy theatres around the city and aboard cruise ships around the Caribbean. Back home in NZ he’s been regularly warming up audiences for TV Three’s The Project, a RAW Quest 2017 grand finalist, performed with The Improv Bandits and all around Auckland. The Nz Comedy Guild Nominated him for Best MC 2019, Best Live Show 2019 (The Dice Show) and Best Podcast 2017, 2018, 2019 (I’ll Be Back Catalogue).

“He hit us with quick-fire puns, well-written material and ended with some impressive impressions used to brilliant comedic effect.”
- Keeping Up With Nz

This show is part of the Auckland Fringe Festival
26 February - 07 March 2019
All tickets available on Eventfinda.co.nz

For all shows we recommend arriving 10 mins before the show starts.
All seating is allocated by the Duty Manager on the night.
Latecomers are not guaranteed seats together

The Classic is a licensed bar.
Anyone looking under 25 will be asked for ID in the form of : NZ Driver's License, Passport or HNZ 18+ Card.
Entry will not be granted to minors, those without ID or intoxicated persons.