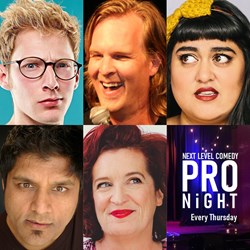 Next level stand-up comedy every Thursday on Pro Night.

LATEST UPDATE : Sorry these shows at The Classic have sold out. We recommend you book for his 2nd Full Tour Show in Auckland on Feb 6th at the Kiri Te Kanawa Theatre at Auckland Live. DETAILS HERE

Top Brit comedian, Russell Howard has swapped a Tier 5 lockdown in the UK for 2 weeks of quarantine in NZ before embarking on his 2021 NZ tour. Russell will be  the first international comedian to tour NZ since the pandemic began back in March.

Live Gigs have been a bit scarce back home so Russell is itching to get on stage and warm up his comedy muscles.

So before he kicks off the official NZ tour on Fri 22 January in Wellington he is going to catch up with old friends and do some sneaky previews and warmup shows at the home of live comedy, The Classic, in Auckland. A venue he previously played back in 2005 when he was invited to the NZ Comedy Fest for the first time.

With out doubt Russell is going to be fizzing when he gets back in front of a live audience in a world class comedy club like The Classic. You can be there.