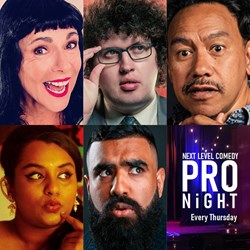 Thursday Pro Night goes next level .. Level 2.0 that is!

Look out every Thursday for a 'next level' selection of Pro Comedians - at Level 2 and beyond.


The Covid crisis is over so we have rebooted the 2020 Raw Comedy Quest.

STOP! $5 door sales are ONLY available at the box office on the night from 7pm. The ONLY presales available are for TABLES OF SIX people via Eventfinda.

Crisis averted! So we are rebooting the 2020 Raw Comedy Quest in search of the funniest new rookie comedian of the year.
The Grand Final was originally scheduled for May during Level 4 lock-down, but will now be held on Sat Oct 31st (On Sale Oct 20th), during the Mocktoberfest of Comedy celebrating the 23rd birthday at the home of live comedy.

So if you think you're funny, or know someone who does, then stand-up this winter and have a crack at winning $2500 in prize money, offers of further professional work at The Classic and beyond and, most importantly, the Glory! Never underestimate The Glory of being the Funniest New Rookie of the Year.
It could be the start of something huge ... or not!

All you need is up to 6 minutes of your own original comedy act. Anything goes. Stand-up, music, sketch, improv, mime, solo, duo's, trio's or troupes.

If you would like to perform;
Sign on by emailing scott@comedy.co.nz.
The Heats kick off on June 22nd and run every Monday until Oct 5th.
The Semi-Finals will be held on Mon Oct 12th and 19th.

Conditions of Entry
1/ You must be an NZ resident - no tourists, please.
2/ You cannot already be earning any money from performing live comedy - No Pro's.
3/ Your comedy must be your own creation - no covers comedians.
4/ You must be available for the Heats, Semi-Finals and Grand Final - please do not enter if the dates above don't work for you.

Buy tickets to watch the show?
$5 door sales are available at the door on the night, every Monday, from 7pm.
We only offer pre-sales/ booking for Tables of Six ( for up to 6 people) for just $25 plus transaction fees, here on Eventfinda.
Tickets for the Semi-Finals and Grand Final will be available here under a separate listing.

A bit of house-keeping;
For all shows, we recommend arriving 15mins before the show starts.
All seating is allocated by the Duty Manager on the night starting from the front.
Groups booked under the same name will automatically be sat together.
IF YOU BUY SEPARATE TICKETS AND WANT TO SIT TOGETHER - TELL THE USHER HOW MANY IN THE GROUP
Latecomers are not guaranteed seats together

The Classic is a licensed bar requiring all minors (under 18) to be accompanied by THEIR parent at all times.
Anyone looking under 25 will be asked for ID in the form of: NZ Driver's License, Passport or HNZ 18+ Card.
8pm shows have an age restriction of at least 15 years old accompanied by their parent.
Entry will not be granted to unaccompanied minors, those without ID or intoxicated persons.