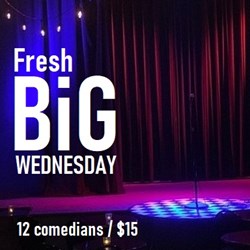 Get fresh on Big Wednesday...

Fresh comedy every WEdnesday with up to 12 comedians for just $15 including the Pro's busting out their latest fresh ideas.

COVID ORANGE UPDATE : Scanning & Vaccine Passes no longer required / Masks are optional but we still offer Exclusive Tables for your bubble and maintain all our excellent Hyper-Hygiene Protocols for your comfort and Safety.

We had to reboot the 2021 Raw Comedy Quest in to 2022 and now we are juggling the  Covid RED protocols but every Saturday night from Feb 19th to Apr 30th we have been holding the heats for the 2022 Raw Comedy Quest - our search for the funniest new comedians of the year.

Now we have finally reached the Semi-Finals where 20 + rookies from Auckland will battle if out to make the cut for the Grand Final on Sat June 4th along with finalists from Wellington, Christchurch and Otago.

It is the bungy jump of stand-up comedy in New Zealand where we take man's greatest fear, public speaking, and add the expectation of being funny!

So who will stand-up and stake their claim for the title of the 'funniest new face of the year' decided in front of a panel of expert judges.

Launched in 1995, the Raw Comedy Quest is New Zealand's biggest comedy competition, with $2500 in prize money, the glory and promises of further work as a professional comedian to be won.

Since it began almost 30 years ago hundreds of Kiwi's have made a stand at the Raw Comedy Quest, a highlight of the annual New Zealand International Comedy Festival. Some have gone on to enjoy continued success as part time and full time performers. Many others have discovered that all they are good for is a few jokes at the office party. But most importantly all of them have faced human kinds greatest fear - 'Public Speaking', with the added expectation of being funny.

The Grand Final on Sat 4 June goes on public sale on May 1st.