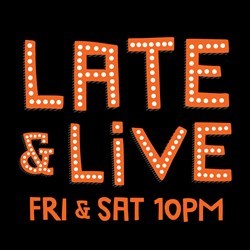 Always popular in the Summer - the Late Night Laugh

A great alternative on the weekend or if you missed out on the earlier 7:30pm All-Stars show. Catch the fresh Pro's and rising stars every Fri & Sat at 10pm. Door sales usually available from 7pm.

**No Raw on Monday 13 April due to Easter Weekend**
Reserve now, pay later will not be available over Easter due to the office being closed.
Door sales will be available from 7pm on the night for the show that night

NB: Door sales from 7pm on the night/every Monday - bookings not essential for The Heats.
Presales are available on Eventfinda for Tables of Six only , not single seats.

It is the bungy jump of stand-up comedy in New Zealand where we take humankind's greatest fear - public speaking- and add the expectation of being funny!

So who will stand-up and stake their claim for the title of the 'funniest new face of the year' decided in front of a panel of expert judges in the Grand Final during the 2020 NZ International Comedy Festival.

Launched in 1995, the Raw Comedy Quest is New Zealand's biggest comedy competition, with $2000 in prize money, the glory and promises of further work as a professional comedian to be won.

Since it began 25 years ago hundreds of Kiwi's have made a stand at the Raw Comedy Quest, a high light of the annual New Zealand International Comedy Festival. Some have gone on to enjoy continued success as part time and full time performers. Many others have discovered that all they are good for is a few jokes at the office party. But most importantly all of them have faced human kinds greatest fear - 'Public Speaking', with the added expectation of being funny.

Do you want to perform?  Contact Scott to book your spot in advance

Email is best: scott@comedy.co.nz
Or visit a Monday night Raw gig and talk to Scott in person.

Purchase a Table of Six on Eventfinda and SAVE! (booking fees may apply)

For all shows we recommend arriving 15mins before the show starts.
All seating is allocated by the Duty Manager on the night starting from the front.
Groups booked under the same name will automatically be sat together.
IF YOU BUY SEPARATE TICKETS AND WANT TO SIT TOGETHER - TELL THE USHER HOW MANY IN THE GROUP
Latecomers are not guaranteed seats together

The Classic is a licensed bar requiring all minors (under 18) to be accompanied by THEIR parent at all times.
Anyone looking under 25 will be asked for ID in the form of : NZ Driver's License, Passport or HNZ 18+ Card.
8pm shows have an age restriction of at least 15 years old accompanied by their parent.
Entry will not be granted to unaccompanied minors, those without ID or intoxicated persons.