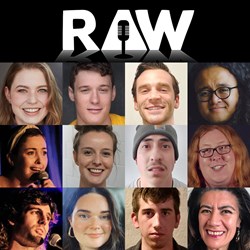 L8 Shows are back - new format - the fresh weekend alternative

Every Friday and Saturday at 10pm its the Late-ful Eight! Eight comedians - Pro's busting out fresh ideas, rising stars and next big things - all in one show. Exclusive tables for 2, 4 ,or 6 people. Now at Level One

Thu 29 Oct : Pro Night - Preview where most of our Finalists will be providing a preview of things to come on Saturday night hosted by Tony Lyall.

After an exhaustive year we have finally managed to complete The Heats and The Semi-Finals in Auckland, Wellington and Central, Christchurch and Dunedin.

Now just a dozen acts remain in the competition. The Grand Final, featuring up to 8 competitors from Auckland plus 2 from the Wellington,  1 from the Christchurch and 1 from Otago regional finals, marks the final battle in the quest to find NZ's funniest new face for 2020!

Join the finest of the new faces , selected from over 200 applicants, performing in a 2 hour showcase hosted by our special guest MC , as our expert comedy judges take on the difficult task of picking a winner .. and a runner up, to claim the prize money, the glory and promises of further work as a professional comedian.

Launched in 1995, the Raw Comedy Quest is New Zealand’s biggest comedy competition, with up to $2000 in prize money, the glory and promises of further work as a professional comedian to be won.

Since it began 25 years ago hundreds of Kiwi’s have made a stand at the Raw Comedy Quest, a highlight of the annual New Zealand International Comedy Festival. Some have gone on to enjoy continued success as part time and full time performers. Many others have discovered that all they are good for is a few jokes at the office party. But most importantly all of them have faced humankind’s greatest fear – ‘Public Speaking’, with the added expectation of being funny.