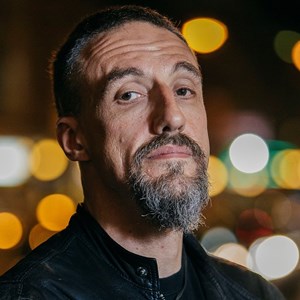 Top international headline comedian, from Australia, as seen on Live at The Apollo.

Internationally renowned stand up comedian Steve Hughes tells it like it is - confronting, alarming and always hilarious. The convict wizard with worldly insights into the bleeding obvious comes armed with more issues than an occupy movement.

“Acutely observed and cutting bone-deep…. with an honesty and openness rarely seen among comics. His insights are spot on, his opinions are intelligent and his jokes are top class.” The Guardian

The inimitable ex-heavy metal drummer has been burning up the international circuit for the past 10 years, he has toured throughout Europe, Australia, USA, Canada & New Zealand to rave reviews and mutinous laughter.

After storming stages at prestigious invite-only festivals and selling out his solo tours worldwide, Steve returned to Australia in 2014 with a new show “While It’s Still Legal” which sold out at Comedy Festivals across the land. Most recently Steve wrote and performed his most personable and intimate show yet entitled “Nervous Breakthrough” which was filmed at The Enmore Theatre (Sydney) for his third comedy release.

He is currently working on new material and a feature length animated film.

“Hughes has got possibly the best pure stand-up technique I’ve ever seen. It’s an added bonus that he’s using it as a force for good.” The Enthusiast

“He's read the so-called social contract and is deeply suspicious of it….Like art and travel, Steve Hughes reminds us that things can be otherwise than they are. Whether you like him or not, that's something we could do with more of in this country. Much more.” Australian Stage

Steve HUGHES is avaliable for hire. Click here to enquire.