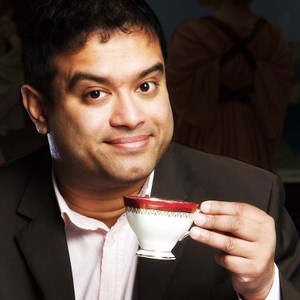 The comedian with all the answers, 'The Sinnerman' from TVNZ's 'The Chase' is already a hot ticket - book early

Paul Sinha, trained medical doctor and probably best known in New Zealand as the 'Sinnerman' on the hugely popular quiz show 'The Chase', has been a successful comedian for almost two decades!

As a club comedian, he has played every major comedy club in the UK, performed in eighteen other countries across the globe, and nominated three times for the Chortle Best Club Comedian Award, winning in 2014.

Paul has taken eight solo shows to the Edinburgh Fringe, a festival veteran having been nominated for the if.comedy Best Show Award in 2006. Plus several years of sold out seasons leading into UK national tours.

Paul has appeared several times on Radio 4 (UK) as well as a successful career in factual comedy with shows focused around cricket, the 2012 Olympics, the Magna Carta, and UK citizenship and three series of the Rose d’Or-winning Paul Sinha’s History Revision.

As mentioned on his website, Paul is ranked sixth in the UK at quizzing and, in November 2017, recorded his second top-ten finish at the European Quizzing Championships.

Yes, it's the guy from The Chase.  But we're not here to quiz him; he's visiting the NZ International Comedy Festival to show off his stand-up comedy. Hot ticket! Book NOW!

Reviews:
“This is what a good stand-up should be. Hilariously funny, passionate and articulate.”  - Chortle

“Well on the way to earning himself a place in the pantheon of comedy greats.”  - The Scotsman

“One of those comedians who makes you realise the power of stand-up comedy and the respect it deserves as an art form.”  - Yorkshire Post