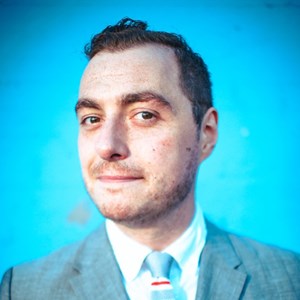 Originally from Newfoundland and Labrador, Matt Wright is a Canadian stand-up comedian, writer, actor and director. Matt is known for his sharp, clean, observational comedy about the struggle of being a person and he can transition seamlessly between one liners, storytelling, and silliness.

Matt has appeared on two Just for Laughs Galas (Laverne Cox 2017 and Ken Jeong 2018), This Hour Has 22 Minutes (where he was a staff writer for three seasons), CBC’s The Debaters, the Winnipeg Comedy Festival, and the Halifax Comedy Festival. Matt has also written for “Still Standing”.

Also an accomplished actor/director, Matt's short film "Wife and Death" was an official selection at multiple film festivals and earned him the "Best Emerging Filmmaker" award at the 2016 Nickel Film Festival. His follow up film "Snowstorm Roulette" was chosen to compete in the CBC Short Film Faceoff, and was nominated for "Best International Comedy Short" at the Austin Comedy Short Film Festival.

"Matt Wright is definitely one of my favourites to watch these days. What I like about him is that he’s perfect for a festival: he can go into a room and make everybody laugh from age 19 to 90.”