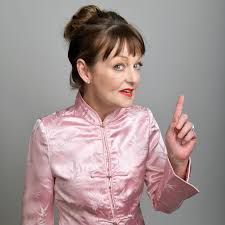 Watch if you dare - Mandy in action in Brisbane.

She takes no prisoners!

Mandy has headlined all over the world including Dubai, Hong Kong, China, Thailand, South Africa across the UK, Europe & Australia.

The first female comic to MC the Jongleurs comedy chain, and the only woman for 15 years to host at The Comedy Store in London and Manchester.

Slick, off the cuff and impossible to match.

As seen on Live at Jongleurs, The World Stands Up, Live at the Comedy Store, Comedy Network, Comedy Blue, Melbourne Tonight, Good News Week and Jo Brand's Like It or Lump It.

Winner of Time Out London Best Comedian
Winner of the UK’s Comic's Comic Award For Best MC
Spirit of The Fringe Award at the 2017 Edinburgh Fringe
One of the most talked about and highly anticipated debuts at Perth Fringe World 2019/2020.

“A stream of priceless one-liners…”  –  The Guardian

"A virtuoso comedienne"  -The Independent.