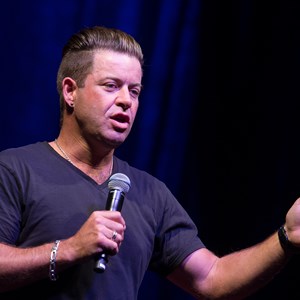 One of the most popular headliners, with both comedians and audiences, on the Australian Pro circuit. Enjoy

2015 has been a cracking year for Lindsay already!
Lindsay has performed at Falls Festival in Byron Bay and the Adelaide Fringe with his new show 'Next Level' and hosted 'Set List' at the Rhino Room. In late March he also hosted 'Laugh Your Pants Off Gala' at Jupiters Casino on the Gold Coast.

In 2014, amongst his 266 gigs, Lindsay has supported Dave Hughes and enjoyed sell out seasons with his show 'What’s Your Name, What Do You Do?' at the Adelaide Fringe and Melbourne International Comedy Festival. complete with 4 star review from the Herald Sun & Performing on the “Set List Show” & TOFOP Live at the Melbourne International Comedy Festival. Followed by Supporting Wayne Brady (USA) Brad Garrett (USA) & Lawrence Mooney. Then a 2 week tour in LA performing at many venues including SetList at the UCB Theatre in Hollywood.

Lindsay loves digital media, as regular guest on Wil Andersons FOFOP Podcast, as well as Hosting a Podcast for BP Australia (CBBP Podcast). A regular guest at 612 ABC QLD with the “Futureheads” Panel. Also known for crowd warm up for many TV shows including Gruen Nation ABC, Q&A ABC & Save Your Life Tonight ABC. He has supported many great acts, including Wil Anderson around the country & Jim Jeffries QLD shows. Lindsay was also a guest Comic on The Darren Sanders Show on GO. In 2013 Lindsay also Hosted many Class Clowns workshops for MICF.

"Webb is an animated & clever storyteller. You can’t help but have a good time" **** Herald Sun 2014
"Webb should be a household name. His effortless comedy is not to be missed" YAWP 2014
"He made my eye POP out from Laughing so much" Roberta, Geelong 2010

Lindsay WEBB is avaliable for hire. Click here to enquire.