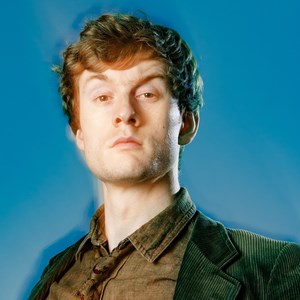 One of the most brilliant and distinctive young comedians of his generation.

UPDATE: Due to public demand an Extra Show has been added to James season in Auckland at Q Theatre on Fri 6 May at 9pm. BOOK HERE

James Acaster is one of the most brilliant and distinctive young comedians of his generation.

James doesn't play by other peoples rules. He has his own unique style and delivery which is winning him a big following of fans looking for fresh laughs in the very competitive crowded scene.

A whimsical master, he has received acclaim from around the world, including nominations for ‘Best Comedy Show’ at the 2012, 2013, 2014 & 2015 Edinburgh Fringe Festivals, and winning the 2015 Chortle Award for Best Show, and Best International Show Award at the 2014 New Zealand International Comedy Festival.

As well as his glowing stand-up career, James is also a TV and radio regular and has secured himself as a favourite across both platforms. James has been a guest on a sting of shows including: Live at The Apollo (BBC 2), Mock The Week (BBC), 8 Out of 10 Cats (Channel 4), Nevermind The Buzzcocks (BBC Two), Dave’s One Night Stand (Dave), Alan Davies As Yet Untitled (Dave), New Zealand Comedy Festival Gala 2013 (TV2 NZ), Best Bits (TV1 NZ) and an international favourite on 7 Days (TV3 NZ).

A NZ International Comedy Festival sensation and must-see act, James Acaster returns to New Zealand with his brand new show in 2016. We're frothing at the mouth to see what he has up his sleeve this year.

Grab your tickets early as he will sell out!

“This is stand-up of the highest, most playful order” – Guardian

“Stitched together and overlaid with such grace” – Telegraph

“One of comedy’s most original voices” – Evening Standard