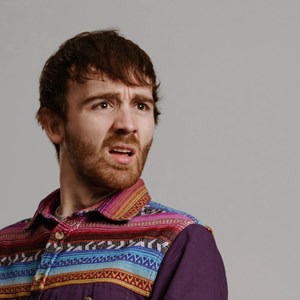 Ian Smith is a multi-award winning comedian, actor and writer.

Since starting at a young age, Ian has developed a reputation as an exciting, creative comic. Mixing conversational, energetic storytelling and observations with unique set pieces and an exceptional skill for improvisation - Ian is a regular at the biggest comedy clubs in the UK.

Ian has appeared on BBC Fresh From the Fringe, BBC3 panel show Sweat the Small Stuff and Channel 5 series The Funny Thing About... He was also one third of popular Dave podcast, The Magic Sponge, alongside Rob Beckett, which has previously topped the iTunes comedy charts.

Ian has performed in New Zealand for the last two years – and appeared on the 2019 Best Foods Comedy Gala.

His 2019 Edinburgh Fringe show Half-Life was his most acclaimed yet (“An effortlessly brilliant stand-up show”The Scotsman) and saw Ian invited to Adelaide and Melbourne Comedy Festivals as part of Best of the Edinburgh Fest. He also made his stand-up debut on The Now Show (BBC Radio 4).

Ian is also a talented actor - starting off as a lead in BBC2 sitcom Popatron, he has gone on to star in Sky comedy Officially Special and have a leading role in major BBC1 drama, The Ark - as well as a number of supporting roles. Ian has also cemented regular writing work on The News Quiz, Newsjack and The Now Show (BBC Radio 4).

“Every element of this show is precisely placed, but Smith has hidden his comedy craftsmanship behind a front of warm bonhomie” - Chortle