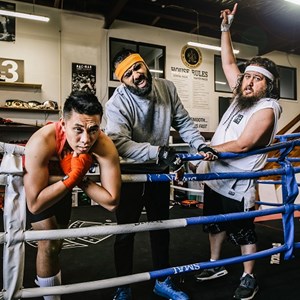 As Frickin Dangerous Bro, their live shows are a mixture of sketch and stand-up, with a style best described as hilarious and anarchic. They always have a plan, but that plan is often derailed when one of them makes a seemingly innocuous comment in the moment, and all of their comedic instincts kick in and they go way off track, which means every show they do is unique.

As well as putting on live shows, they have made multiple TV appearances including the NZ Comedy Gala (2017 & 2019), AotearoHa: Rising Stars, The Spinoff TV, Funny Girls and as co-hosts of Season 1 of Maori TV’s Only In Aotearoa, where they made up half of the writing team.

They also host a weekly podcast called The Frickin Dangerous Bro Show as part of the Little Empire Podcast Network, where some of their sketch and stand-up inspiration comes from.

Their work has led to them winning the NZ Comedy Guild Best Online Presence Award in 2016, and garnering a nomination for the Fred Dagg Award at the 2018 NZ International Comedy Festival.

Their comedy is a mixture of hilarious observations and stories, a touch of social commentary, and a whole lot of straight up goofyness.

Check them out on Facebook: Frickin Dangerous Bro Page