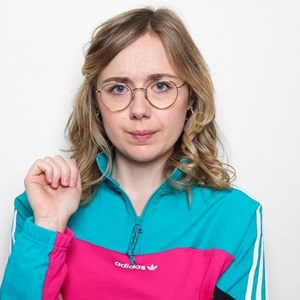 A rising star on the Australian Pro circuit.

In previous years, Floyd has been selected as a NSW state finalist for  Raw Comedy, and performed in various comedy festival showcases around Australia. For the past two years, Floyd has been part of the  Sydney Comedy Festival Showcase tours in regional NSW, and more recently, was invited to join the cast of the Melbourne International Comedy Festival Roadshow.  She has also performed in the U.K., New Zealand and Japan.

Floyd also works as a freelance writer for the  Law Society Journal,  and has experience in writers rooms, including  with See-Saw Films and Gaumont International. In 2020, she was nominated for ‘Young Writer of the Year’ at the NSW Publishing Awards for her comedy column  ‘Avid for Scandal’. She is currently developing a comedy web series funded by Screen Australia titled  Curry Me Home.

Floyd ALEXANDER-HUNT is avaliable for hire. Click here to enquire.