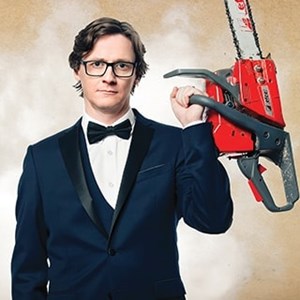 Since the 1997 NZ International Comedy Festival, Ed Byrne has established a huge legion of fans across the country. Having returned 8 times for sell-out tours across New Zealand.

During his twenty years in comedy, Ed has enjoyed huge critical and popular success worldwide including UK, Ireland, Australia, Canada and New Zealand. He has performed hit tours, sold out many runs at the Edinburgh Fringe, had a successful two-week run in the West End and appeared on radio, television, the stage and the big screen.

In the UK and Ireland, Ed has become a regular fixture on television and radio. He presented his own show on London Live on Saturday mornings --often with his mother in tow--, is the current presenter of What’s So Funny on BBC Radio 4 Extra, and has officially been named a “friend with benefits” of the Shaun Keaveny Breakfast Show on BBC 6 Music. On television, he has appeared on panel shows like Mock the Week, 8 Out of 10 Cats, Never Mind the Buzzcocks, and Have I Got News for You, and has made several memorable appearances on The Graham Norton Show. Locally he can be seen on TV3's 7 DAYS.

“A masterful display of the comics art…This is a seamless and perfectly timed show that could stand proudly next to any Izzard, Bailey, Carr or Skinner stadium-filler”  SUNDAY TIMES

“Byrne is at the top of his game”SUNDAY TELEGRAPH

"Ed Byrne is a class apart. Not pretentious, not offensive, not surreal, just a spinner of wallopingly funny yarns about life and the obstacles encountered while attempting to live it." - Evening Standard UK Sept 2008

"This superb Irish comic returns with a new show about marriage, class, the youth of today and anything else that strikes him as humorous. He's in a great streak of form at the moment." - TimeOUT UK

"It's rare for comedy to merit the word 'masterful' but in this case it is no overstatement" -The SCOTSMAN, Edinburgh

MORE Shows in the 2019 Festival

Ed BYRNE is avaliable for hire. Click here to enquire.